Join us in honoring key leaders of the dairy industry!

WCMA's annual Recognition Awards shine a light on those who have gone above and beyond to contribute to the current and future success of the dairy industry. Each year, honorees are nominated and selected by their peers in industry, and are formally recognized at CheeseCon and CheeseExpo. 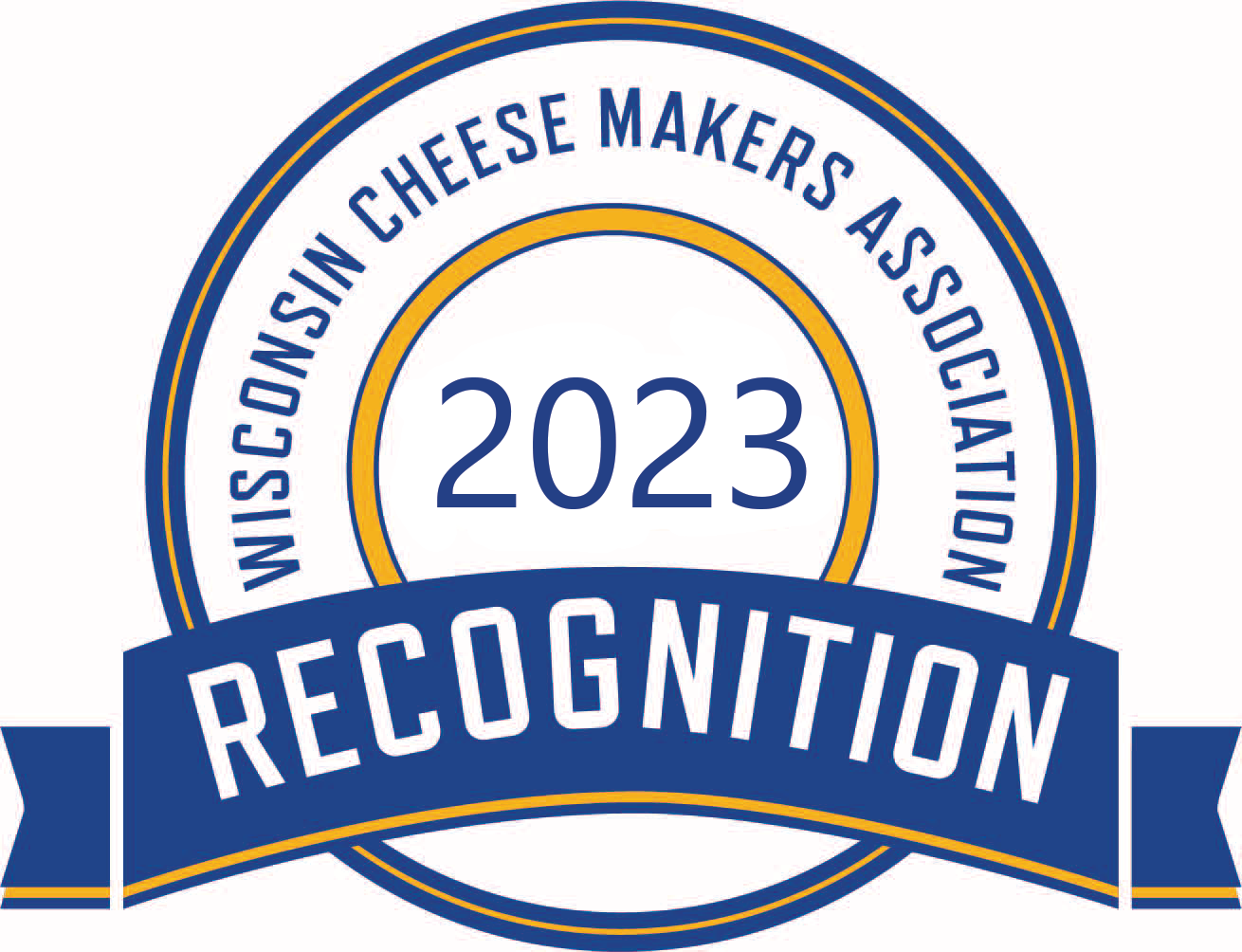 Voting is now open for the 2023 WCMA Distinguished Service Award, honoring supplier partners who have played a significant role in building. All members of industry are invited to help select the recipients of this award, with a maximum of ten individual voters allowed per company.

All 2023 Recognition Awards, including the Distinguished Service Award, will be presented on Thursday, April 6 during the WCMA Recognition Breakfast at CheeseCon 2023 in Madison, Wisconsin. 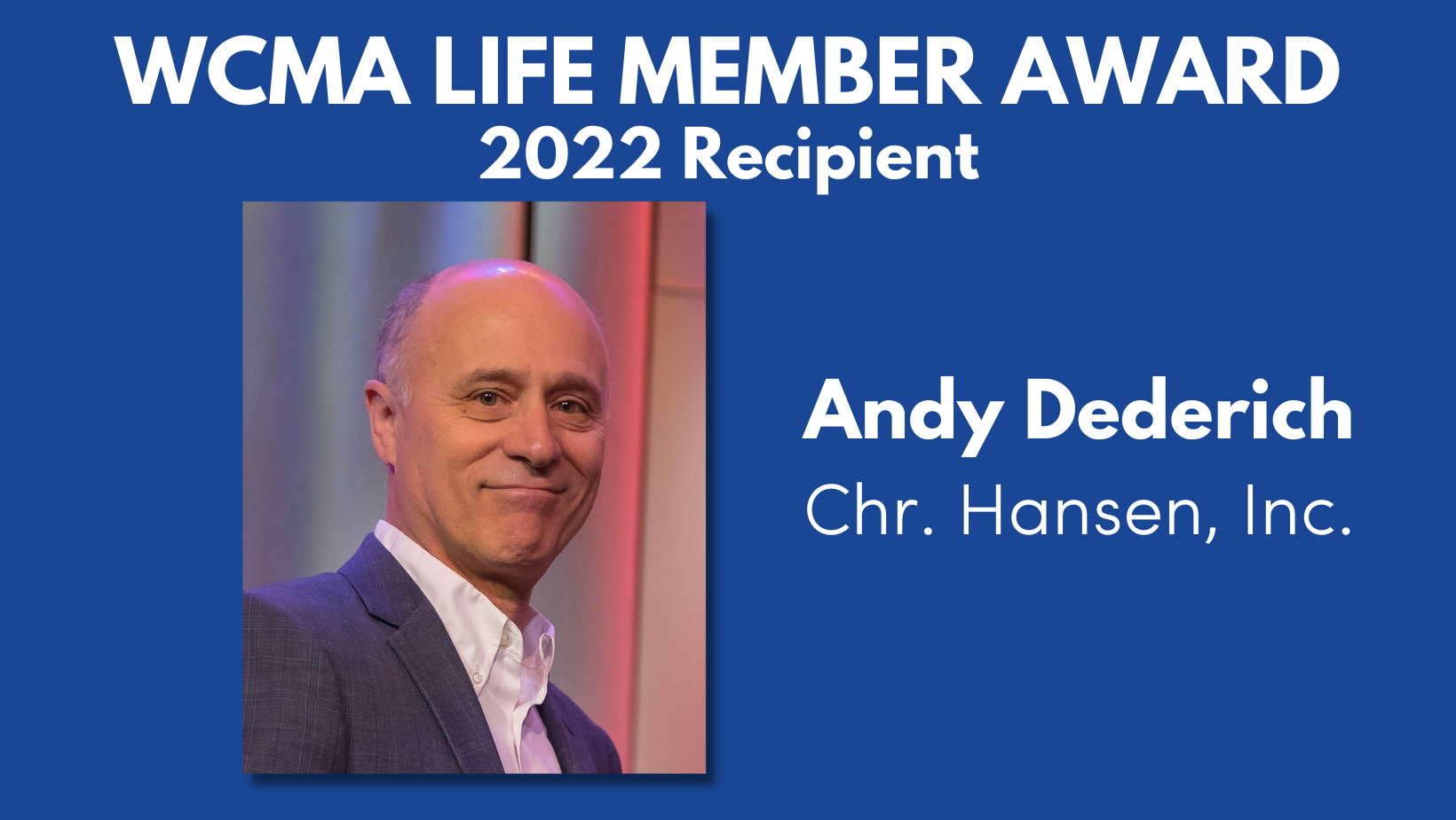 In 2022, Andy Dederich received the Association’s highest honor: the WCMA Life Member Award. WCMA has offered the Life Member Award since 1918, and Dederich will be the 91st recipient. The award recognizes people who have played a significant role in the success of the Association through leadership, support, and service to the institution and its activities.

Andy Dederich is a Senior Key Account Manager with Chr. Hansen, Inc. of Milwaukee, Wisconsin. Prior to starting with Chr. Hansen in 2014, Andy has held prominent roles at other key companies within the dairy industry such as DSM Food Specialties and Cargill. Today, Andy serves several key accounts using Chr. Hansen Cultures and Enzymes throughout the United States and Canada.

Andy has played a significant role in advocating for supplier and cheese manufacturer participation in WCMA through Association membership and activities, and has actively worked to encourage the growth and development of the Championship Cheese Auction. He served on the WCMA Board of Directors from 2006-2011. 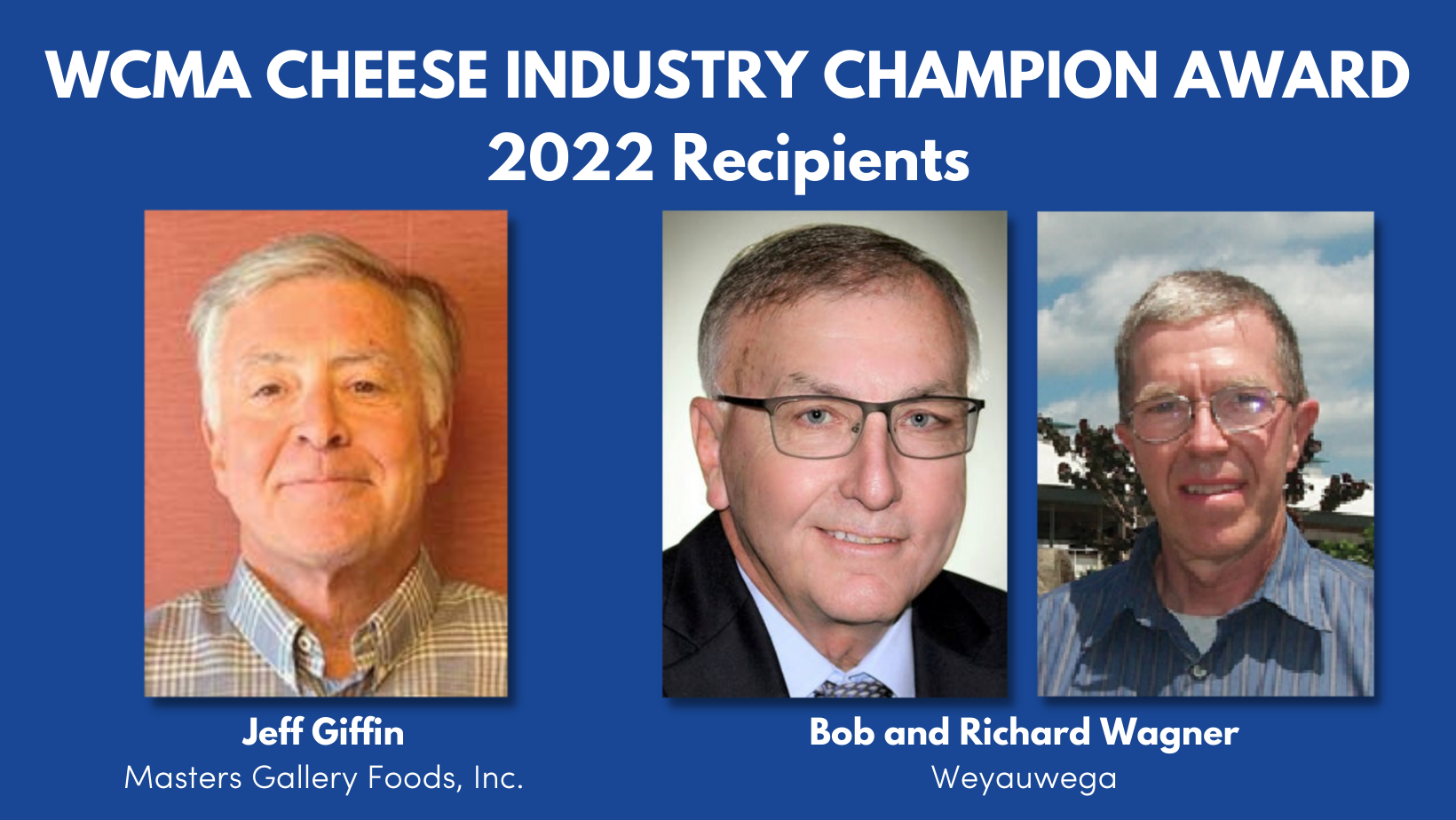 Jeff Giffin and Bob and Richard Wagner were recognized as the 2022 WCMA Cheese Industry Champions, awards that are given to industry leaders who, through their everyday business decisions, have created tremendous opportunity for others.

Jeff Giffin is Executive Chairman/Chairman of the Board for Masters Gallery Foods, having previously served as President and CEO of the company from 2006-2016. Under Jeff’s leadership, the company has more than quadrupled sales revenue, volume, and employee count. He has developed lasting industry relationships and has played a significant role in establishing Masters Gallery Foods as a leader in both retail and foodservice channels with the highest quality private label cheese.

Bob and Richard Wagner are the third generation in a family cheesemaking tradition that first began with their grandfather Jacob in 1923, becoming Weyauwega Milk Products in 1961. Bob brought his accounting training to drive the business, becoming company president in 1984, and Richard his engineering degree and doctorate in food science, to build a company always on the cutting edge of technology. Under the pair’s leadership, the company has been a pioneer in the dairy processing industry through several successful mergers. Weyauwega became Trega Foods in January 2003 and made news again five years later with the sale of Trega to Agropur, Canada’s largest dairy cooperative. 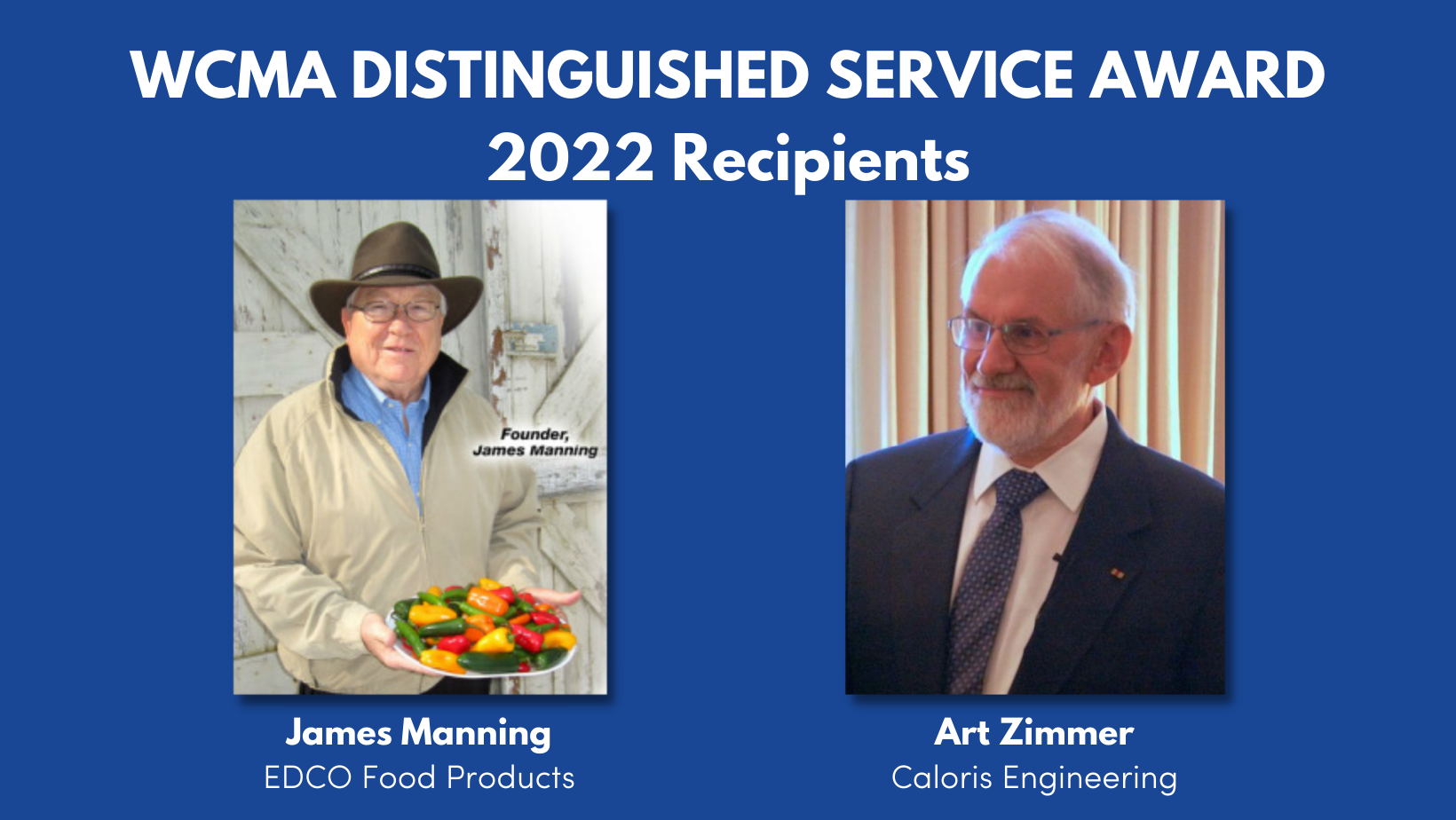 The WCMA Distinguished Service Award, reserved for respected and highly valued supplier partners to the cheese manufacturing industry, allows WCMA members to vote on prospective honorees. James Manning and Art Zimmer were selected for the honor in 2022.

James Manning is the President and Founder of EDCO Food Products in Green Bay, Wisconsin. With five decades of knowledge and experience, his innovations in pepper and pickle processing have contributed to tremendous strides for the dairy processing industry. In 1992, he opened a state-of-the-art facility in Mexico. The plant’s proximity to EDCO’s contracted growers ensures fresh raw materials and adherence to high food safety and environmental standards. Manning’s long-standing relationships with dairy processing suppliers have helped EDCO efficiently deliver high-quality pepper products to cheese plants across the United States.

Art Zimmer began his foray into U.S. dairy processing in 1975, when he forged a successful connection between German energy-saving technology and the U.S. market need for large capacity units of highly sanitary design. A trailblazer in evaporator technology, Art established his own Zimmer Corporation in 1994. After a highly successful run, the Carlisle Companies acquired it in 2000 to become part of CPS, which in turn was purchased by Tetra Pak. Rather than retire, Art founded Caloris in July 2006. The company grew into a highly respected organization, and in 2014, Art and his partners sold the majority of Caloris to outside investors. 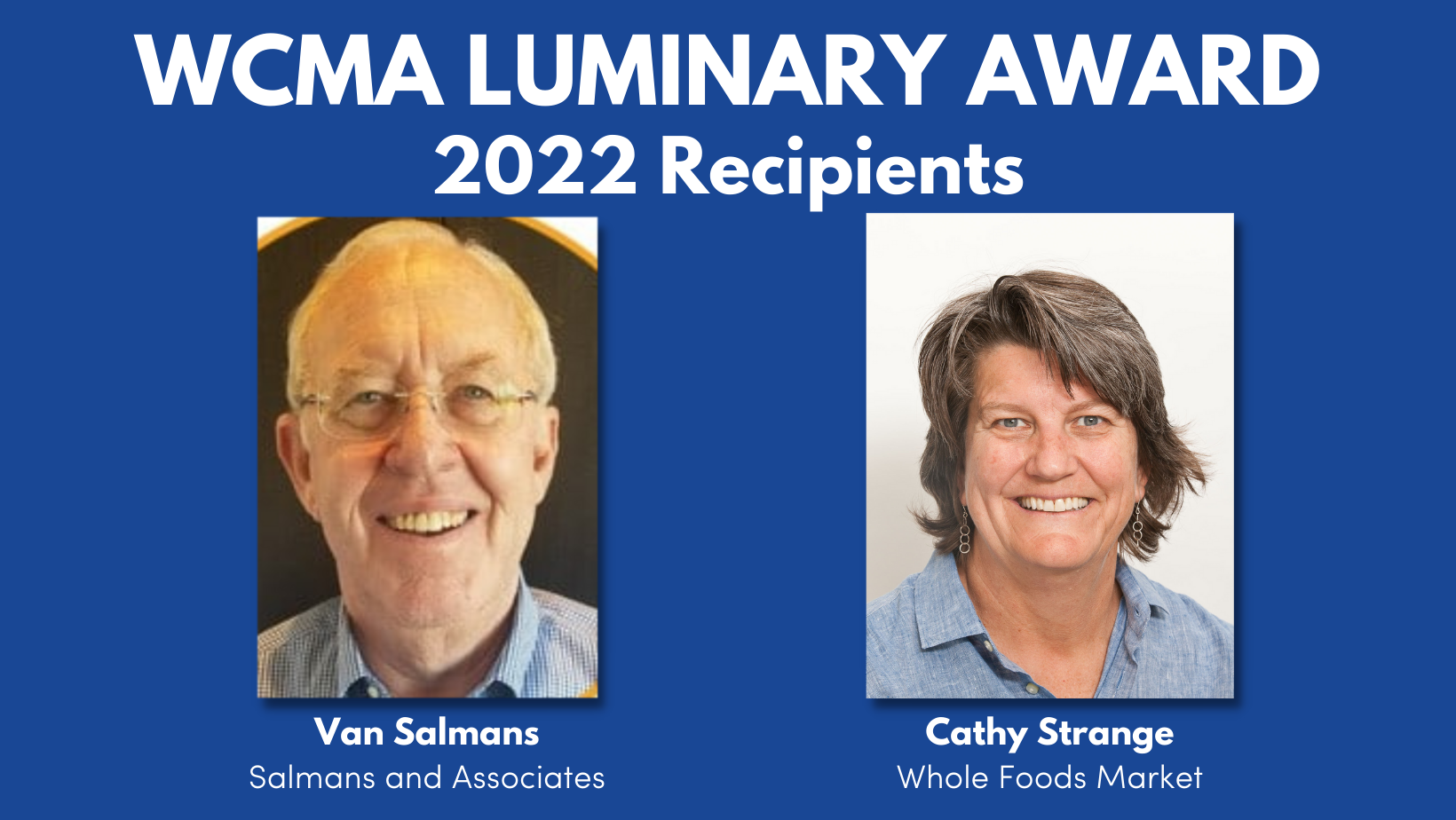 Our newest honor, the WCMA Luminary Award, recognizes the contributions of leaders in dairy product sales and marketing; individuals who introduced new concepts, products, or innovative ideas to drive sales in the U.S. or around the world. The 2022 recipients of the Luminary Award were Van Salmans and Cathy Strange.

Van Salmans founded one of the nation’s most recognizable cheese sales and marketing organizations – Salmans and Associates—in 1981. He has evolved this small firm into a high-volume sales powerhouse, representing major cheese manufacturers to foodservice wholesalers, food processors, restaurant chains and industrial users in the Upper Midwest and select markets around the U.S. Van has worked closely with the Center of Dairy Research and cheese manufacturers to customize products to meet foodservice, retail, and industrial demand. He has also served on the boards of the International Dairy Deli Bakery Association and the American Blue Cheese Association.

Cathy Strange joined Whole Foods Market in 1990 and has a wealth of food industry experience and expertise. As the global executive coordinator of specialty, she seeks out products that meet Whole Foods Market’s strict Quality Standards. For 11 straight years, she has served as an Expert Judge for the U.S. Championship Cheese Contest and the World Championship Cheese Contest. She serves as New World President and an ambassador for the distinguished international Guilde des Fromagers de Saint-Uguzon. Cathy has also received the French Legion of Merit for Agriculture and the Coltellino d'Oro award from the Consorzio del Formaggio Parmigiano Reggiano and was honored in 2015 by the American Cheese Society with the Lifetime Service Award. 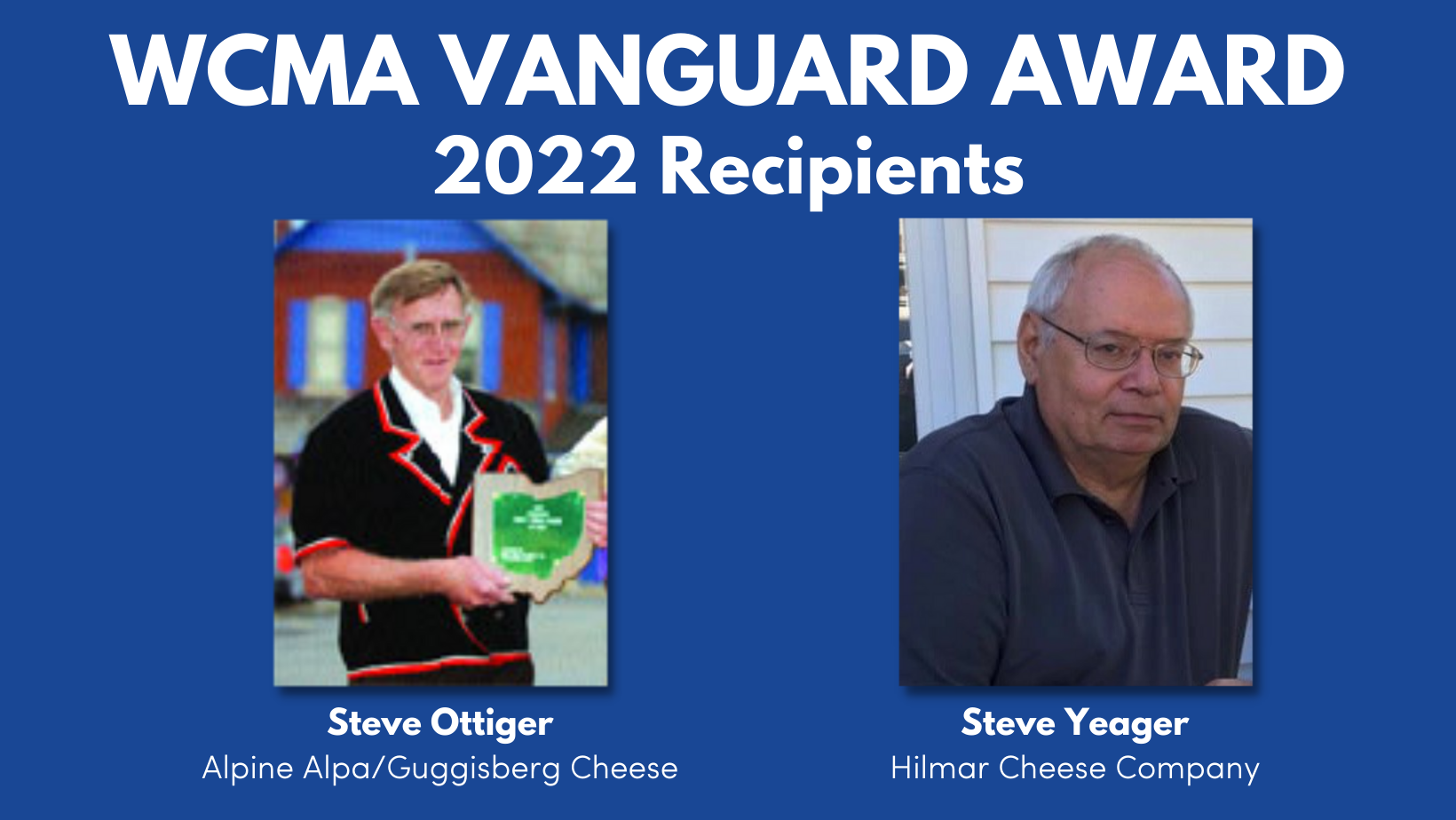 The WCMA Vanguard Award is intended to recognize cheesemakers or cheese manufacturing employees whose work helped to blaze new trails in dairy operations. In 2022, this award was given to Steve Ottiger and Steve Yeager.

Steve Ottiger earned his cheesemaker title in his native Switzerland before arriving in Wisconsin in 1959. In 1961, he began a long career producing award-winning, Swiss-style cheeses in the U.S. For 34 years, Steve worked at Alpine Alpa in Wilmot, Ohio, where his experience included a plant upgrade that included the first Casomatic cheesemaking system in the U.S. In 1997, Steve helped current WCMA Board Member Richard Guggisberg establish a highly automated Swiss cheese plant whose success continues to this day, evidenced by Guggisberg Cheese earning Ohio Grand Champion Cheesemaker in eight of the last 10 years and many Best of Class wins at the U.S. and World Championship Cheese Contests.

Steve Yeager found his passion for cheesemaking during a summer job at Borden Foods in Wisconsin in 1976, which turned into full-time cheesemaking and product quality and grading roles. In 1994, Steve moved to California and began his career at Hilmar Cheese Company as Supervisor. He advanced to Whey Lab Manager, Plant Manager, and then the Cheese Technical Manager at Hilmar’s massive cheese plant in Dalhart, Texas. Steve now serves as Cheese Product Specialist, R&D, where he continues to make sure that Hilmar cheese exceeds customers’ highest expectations. 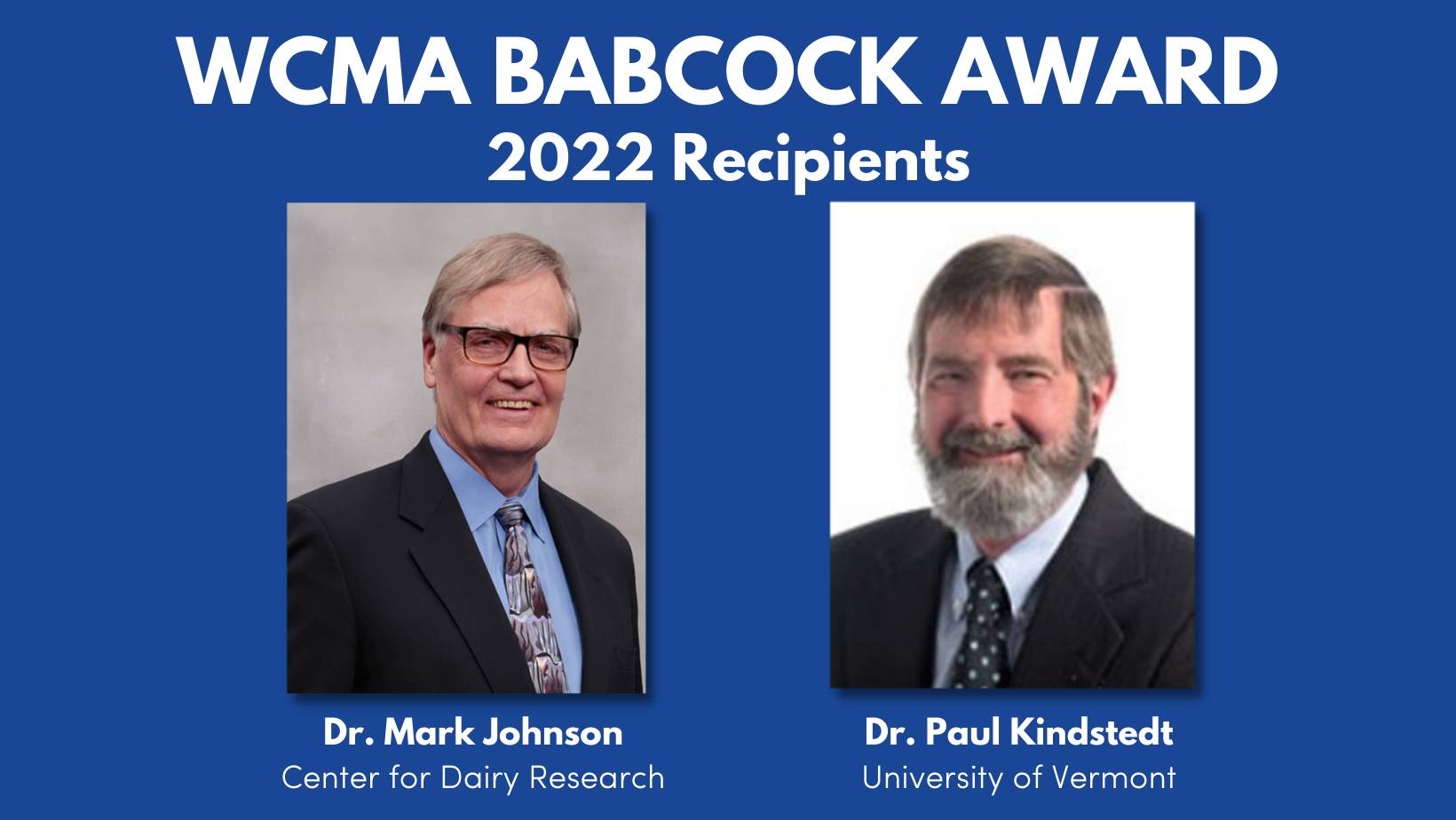 The WCMA Babcock Award, named for Stephen Babcock, the famed agricultural chemist and University of Wisconsin professor, recognizes the contributions of those in education or affiliate organizations partnering with cheesemakers in the pursuit of dairy industry innovation and excellence, and was given to Dr. Mark Johnson and Dr. Paul Kindstedt in 2022.

Dr. Mark Johnson serves as Assistant Director, Distinguished Scientist, and a member of the Senior Management Team at the Wisconsin Center for Dairy Research. In addition to teaching cheesemaking and grading, his main research interests include developing manufacturing and ripening protocols for specialty cheeses and solving industry cheese quality issues. Dr. Johnson has served as a technical judge for the U.S. and World Championship Cheese Contests, the American Cheese Society, and the Australian Grand Dairy Awards. Dr. Johnson has been with CDR for more than 30 years and holds a Ph.D. in Food Science.

Dr. Paul Kindstedt is a Professor of Food Science in the Department of Nutrition and Food Sciences at the University of Vermont. He has authored numerous research articles and invited papers for conferences on dairy chemistry and cheese science, as well as many book chapters. His research focuses on crystal formation in cheese, and their effect on cheese appearance and flavor. Dr. Kindstedt has received national professional recognition for both his research and teaching and currently serves as the President of the American Dairy Science Association.

If you have questions, please contact our office at 608-286-1001 or email WCMA Business & Membership Manager Sara Schmidt.